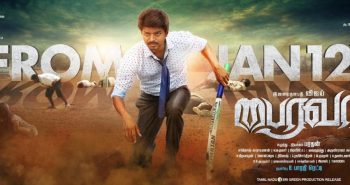 Illayathalapathy Vijay and Keerthy Suresh starring upcoming film Bairavaa was censored on Tuesday, January 3, and the Tamil film has bagged a ‘U’ certificate and get a 30 percent tax exemption, thus paving way for its worldwide release on January 12.