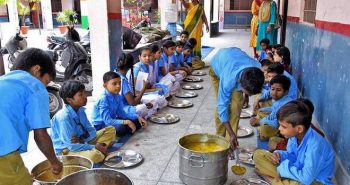 In Rajasthan teachers and anganwadi workers have spoken out against the centre’s recent decision to link midday meal scheme to Aadhaar ,saying the process of food  distribution and teaching and learning would be disrupted by this.  If any child is excluded through Biometrics then it would be only an “inhuman culture” they said.   While responding to queries of the Right to Food Campaign and People’s Union for Civil Liberties (PUCL) activists, teachers called upon the administration to focus on more nutritious food for the children along with a strong school health programme.  The authentication process of daily weekly and monthly only gained surprise.   PUCL-Rajasthan president Kavita Srivastava said here on Thursday that the activists, during their conversations with the government school teachers and principals, found them aghast at the concept of making Aadhaar mandatory for children.  Many instances of classroom hunger were reported by teachers.  Many government school children are from economically weaker sections.  Children are mostly dalits and minorities and schools generally ensure the little siblings who come with  older children are also fed.  “If the machine does not match biometrics of a child, will he remain without food and sit in a corner watching others having their meals? Won’t it be inhuman?” asked a teacher on the condition of anonymity.  An average of 200 children are there in each school and the teaching ,learning process will be disrupted as the day would be exhausted  in the authentication process.  While one-time production of identity on enrolment was found justified, Ms. Srivastava said the teachers were mostly arguing for a more nutritious meal.  “If milk, paneer and eggs are supplied, children will be ensured of quick and direct proteins and other micro-nutrients,” said Ms. Srivastava.