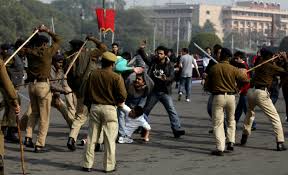 In Fatehpur district  Uttarpradesh,policemen beat up and lathicharged farmers who were lined up outside a bank.  The government suspended two police officers after this incident.  It was instructed by Chief Minister Akhilesh Yadav .  The video of this incident was circulated on social media.  People who were standing  in a queue outside the local State Bank of India were beat up by police.  The constable reacted angrily as his hand got stuck in the channel grill of the bank door as people tried to make their way in.  This is not the first incident after the demonetization.  In  Mau, a town the crowd got angry at finding the ATM Shut and ransacked banks.  They shouted slogans and the police had to resort to lathi charge.  In Muzaffarnagar two persons were injured due to such incident.   A girl was injured  in the due course.