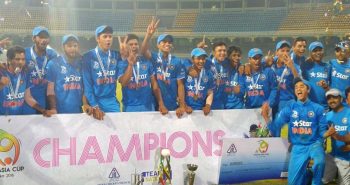 India on Friday beat Sri Lanka by 34 runs in the final of the Under-19 Asia Cup at the R Premadasa Stadium in Colombo on Friday to lift the trophy for the third time in a row.

The Indian colts opted to bat first after winning the toss and scored 273/8 in 50 overs and then rode on its spinners’ fine bowling effort to bowl out Sri Lanka at 239 in 48.4 overs.

Himanshu Rana top-scored with 71 runs, with Shubman Gill being the second-highest run getter with 70.