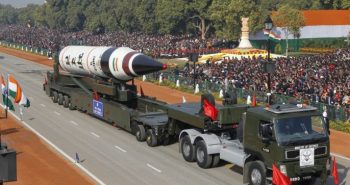 India is all set to test its Agni-V intercontinental ballistic missile (ICBM), capable of striking even the northern China.

The test which is scheduled to happen today, December 14, will be the fourth and the final test of nuclear-capable Agni-V from Wheeler Island off Odisha.

“This will be the final test of the three-stage Agni-V, which will be tested for its full range, before the Strategic Forces Command (SFC) begins its user trials,” the source said.

The three-stage Agni-V was earlier tested in an open configuration in April 2012 and September 2013. The third test was done from a hermetically-sealed canister mounted on a Tatra launcher truck in ‘a deliverable configuration’ on Jan 30 2015.

The fourth test, however, was put on hold due to minor technical snags which required a tweaking of the internal battery and electronic configurations.

IANS reported that the Agni-V, that has a 5,000 km range which gives it the farthest reach among all Indian missiles, is the most advanced version of the indigenously built Agni missiles.