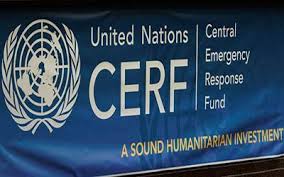 Today the United Nations Central Emergency Response Fund (CERF) hosted its High-Level pledging conference for 2017. Twenty-nine donors pledged almost US$273 million to the Fund to support urgent aid whenever and wherever crises hit.

India has said it will contribute USD 500,000 to the United Nations’s emergency response fund for the year 2016-17 as it stressed that the international response is falling significantly short of the challenges posed by humanitarian crises across the world.

Counsellor in India’s Permanent Mission to the UN Anjani Kumar said at the high-level Pledging Conference that the Government of India would be contributing USD 500,000 to the UN Central Emergency Response Fund (CERF) for the year 2016-17. India’s cumulative contribution to the fund so far has been USD six million.

Kumar said India has assisted in relief efforts in countries such as Afghanistan, Maldives, Nepal, Somalia, Sri Lanka and Yemen in a number of situations of natural disasters like tsunamis, earthquakes and cyclone.