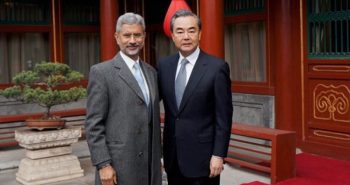 India sees China’s Silk Road initiative as a geopolitical competition and is using the Kashmir issue as an “unfounded excuse” to oppose the ambitious project, Chinese state media on Thursday alleged and asked New Delhi to “abandon” its “cliche mentality”.

“The official reason the Indian government rejected the offer to join the initiative (Silk Road) is that it is designed to pass through Kashmir. However, it is just an unfounded excuse as Beijing has been maintaining a consistent position on the Kashmir issue, which has never changed,” one of the two articles on India by state-run Global Times said.

“India sees the Belt and Road initiative as a geopolitical competition,” the article said, criticising India for hindering Beijing’s push into South Asia and the world with multi-billion Silk Road project which is also known as the ‘Belt and Road’ (BR).

“Whether to continue to boycott or join the Belt and Road remains a conundrum for New Delhi,” it said adding that, India is the only one which can help itself.

The article said that India should give up its “biased” view on the BR initiative.

“It is high time to abandon the cliche mentality of associating everything with geopolitics. India will surely see a different world if it does,” the article said.

Referring to India’s reservations to attend the BR summit called by Chinese President Xi Jinping, the article said it may be an “embarrassing occasion” for India as the meeting is backed by “China’s peripheral countries, notably Russia, Indonesia, Kazakhstan and Pakistan”.

Chinese Foreign Minister Wang Yi recently said 20 heads of state will attend the summit, together with over 50 leaders from international organisations, over 100 ministerial officials and more than 1,200 guests from around the world.

The article referred to a comment by Foreign Secretary S Jaishankar during his visit here last month to co-chair the upgraded India-China strategic dialogue, saying India is examining China’s invitation to attend the summit and “how a country whose sovereignty has been violated can come on an invitation”.

In the meantime, however, state-run Chinese media stepped up campaign to pressurise India to join the summit.

China apparently is keen about India’s participation in the summit as the project struggled to make headway in the region except the USD 46 billion China Pakistan Economic Corridor (CPEC) where both Beijing-Islamabad are putting all efforts to show early harvest.

Media reports here said that Xi plans to invite his US counterpart Donald Trump to attend the meeting during their first summit early next month in Florida.

The article also said, “it seems that the mainstream opinion throughout India is that the connectivity brought about by BR initiative is geopolitically significant.

Therefore, India cannot a llow the initiative to expand further into South Asia”.

“This could also explain why the BCIM has seen no progress since its proposed by Chinese Premier Li Keqiang in 2013, and also why New Delhi has been keen on Japan’s investment in the Iranian port of Chabahar,” it said.

“New Delhi may also feel embarrassed as Moscow has actively responded to the Belt and Road initiative and will build an economic corridor with China and Mongolia,” it said, adding Russia and Iran seeking to join the CPEC putting “India in a more awkward position”.

Another article in the same daily said a “benign” competition between India and China may help development in South Asia but they should avoid “cut-throat” rivalry.

“The so-called dragon-elephant contention is perhaps a blow against strategic mutual trust between Beijing and New Delhi, but may be conducive to development in South Asia,” it said.

Accusing India of not being “generous” to its neighbours, it said “a yawning infrastructure funding gap in South Asian countries creates space for China and those nations to strengthen economic cooperation”.

“Only by investing more resources in regional integration and extending the benefits from India’s rapid economic growth to other South Asian countries can New Delhi maintain its influence in the region,” it said.

“Benign competition between China and India will be conducive to development in South Asia. The question remaining is how to avoid cut-throat competition as Beijing and New Delhi jostle for influence. India and China should seek common ground while strengthening cooperation with South Asian countries to promote regional integration,” it said.