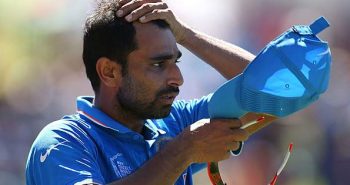 Indian pacer Mohammed Shami is all set to miss the limited-overs legs against England early next year due to his right-knee injury.

According to reports, Shami will miss the three ODIs which begin on January 15 next year and will also likely miss the three T20I matches that follow the ODI series.

The 26-year-old pacer from Bengal is now recovering from an injury to his right knee. Earlier, Shami had his left knee operated on after the 2015 ICC World Cup in Australia and was out of action for almost one year.

Shami was quite impressive in the three Test Matches against England, picking up 10 wickets in conditions, which did not assist the seamers too much. The bowler used his brilliant skills with both the old and new ball to be effective in the three matches.

As per reports, Delhi pacer Ishant Sharma will be given a chance in the Indian team in Shami’s place while veteran seamer Ashish Nehra is also in the contention for the limited overs’ series.