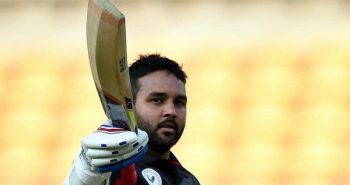 Parthiv Patel, 31-year-old wicketkeeper batsman will replace injured Wriddhiman Saha in the 3rd Test match against England at Mohali, beginning on November 26.  The southpaw will return to the national Test side after 8 years.

The Indian cricket board in its media release said, “BCCI medical team confirms that India wicket keeper Wriddhiman Saha developed a strain in his left thigh during the second match of the five match Paytm Test Series-2016, played against England at Visakhapatnam.”

“As a precautionary measure, Saha has been advised rest and will not play in the next Test match of the series,” added BCCI.

“Parthiv Patel will replace Saha in the Indian team for the third Test to be played from November 26, 2016, at Mohali,” concluded BCCI.