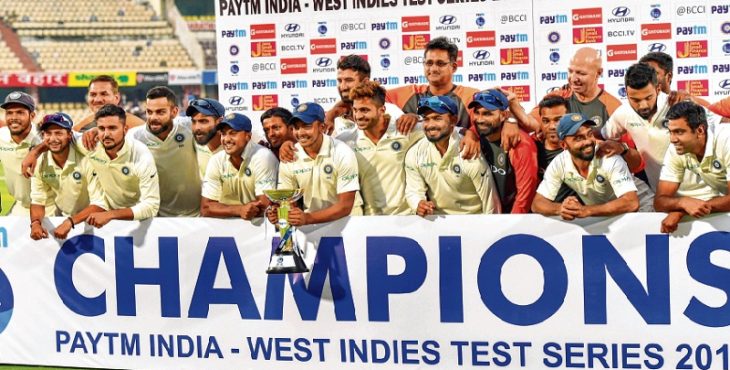 Hyderabad : A clinical India completed one of the most ruthless clean sweeps in recent times, demolishing a listless West Indies by 10 wickets in the second Test, inside three days, to clinch the series 2-0 on Sunday.Mohammed Siraj and Hanuma Vihari were released to play Vijay Hazare quaryer-finals for their respective teams Hyderabad and Andhra.

Umesh Yadav’s maiden 10-wicket haul (6-88 and 4-45) on a decent track was the highlight as India reached the meagre victory target of 72 in 16.1 overs, courtesy unbeaten partnership between openers Prithvi Shaw (33) and KL Rahul (33). While any Test series victory is welcome, it hardly was an ideal preparation for the big away-series against Australia, starting December 4 in Adelaide.

West Indies captain Jason Holder (5/56 in 23 overs) used the second new ball to good effect as he completed his fifth five-wicket haul in Test cricket. Shannon Gabriel after erratic performance on Saturday came back well to take 3-107 in 20.4 overs. Holder first got one to rear up from back of length to shatter Rahane’s dreams of a 10th Test hundred.