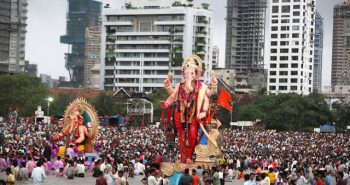 In Mumbai, thousands of people thronged the streets to bid adieu to God Ganpathi on Sunday .  Foreigners made their way through the crowd to witness the immersion procession . Around 300 visitors from Brazil, Australia, Turkey , France and U.S. were present.  Maharashtra Tourism Development  Corporation had organised a viewing deck for the tourists guests.  Visitors were thrilled to witness the procession.  They were surrounded by 10 CCTV cameras , five watch towers and 1400 municipal personnel.  A turkey nationalite said  “I love the culture, the colours and the music. The enthusiasm is contagious.” The French nationals and their children each 10 years old took part in the festivities by tying saffron turbans around their heads.  They felt it impressive.  A Japanese couple found it convenient in the air-conditioned enclosure and said  “It is great to watch the celebrations from here while having coffee”. Two directors of a risk management society from New York were astonished to see the management of such a large crowd.  While MTDC received 72 advance registrations on its website, 112 visitors registered through its travel partners in South East Asia, and 63 walked in during the day.  Most foreign tourists were unaware of the prior registration, but after the volunteers spotted them they were offered on – the- spot registration. To enable the visiting tourists to register MTDC  had tied up with the Federation of Hotel and Restaurant Association of India .