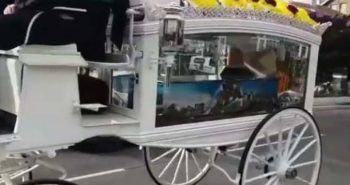 An eight-year-old Indian-origin boy in the UK has been laid to rest in an Iron Man coffin with his mother organising a moving superhero-themed funeral after the tragic demise of her Marvel comics fan son.

Neal Dhilan Singh’s funeral yesterday saw undertakers dressed as Batman and Robin while crowds of mourners sported colourful capes and masks in honour of his memory.

Neal passed away unexpectedly on the evening of January 5 at the family home in Beckenham.

Having had a fever for two days, he went for a bath but was found passed out by his mother.

Despite the best efforts of paramedics, Neal could not be saved.

Police confirmed Dhilan’s death was not suspicious and a post-mortem found the cause was “unexplained” with drowning having been ruled out.

Bobby Singh, his heartbroken mother, paid a glowing tribute to her “loving, caring and cheeky” son ahead of his superhero-themed funeral this morning.

In order to give Dhilan the perfect send off, Bobby came

up with the idea of a unique Marvel Comics superhero-themed funeral.

Dhilan’s coffin was inspired by one his favourite characters Iron Man while undertakers leading the procession dressed up as Batman and Robin.

Other mourners dressed as the Incredible Hulk, Wonderwoman, Superman and Captain America.

“He’s always been into Marvel, Spider-Man and Iron Man,” Bobby was quoted as saying by the Croydon Advertiser. “When we put him in there on Friday he just looked so at peace. It has been handcrafted especially,” she said of the coffin.

“We wanted to have a theme — just like a birthday party there has always been a theme. So, in my mind, while we are celebrating his life I thought we should have it themed,” Bobby said.

At the funeral, Dhilan’s best friend dressed as a Supergirl and paid tribute to him writing.