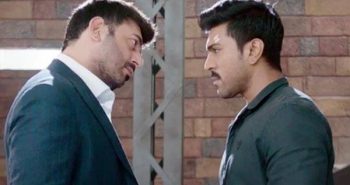 Dhruva, the remake of superhit film Thani Oruvan, had been creating positive buzz in the media.

Dhruva has grossed approximately Rs 29 crore in Andhra Pradesh and Telengana, Rs 6.77 crore in Karnataka, Rs 6.72 crore in the US and Rs 5 crore in other parts of the globe.

“My full appreciation to charan and surendarreddy for keeping the story infront instead of image which made Dhruva intresting and captivating from beg till end.Charan looks great with his fantastic physic.performed very well with subtle expressions through out. Rakul is ravishing. Aravind swamy already proved in tamil version and he does no less here. Greatjob. full marks to the writer who did a fabulous job.Real hero,” Rajamouli tweeted.

Varun Tej: #Dhruva is an outstanding work of all the crafts! @hiphoptamizha slayed it with the BGM! top notch cinematography n direction! Arvind Swamy Garu was unbelievable and one of Charan Anna’s best work and the way he played Dhruva was outstanding!! Love you BRO!

Dhananjayan Govind: #Dhruva is a very well (re)made film. Both #Ramcharan & @thearvindswami were stylish & impactful. Worth watching for its nice presentation

Sushmita Konidela:#Dhruva the most stylish movie. Loved the gripping screenplay. Charan’s performance is the biggest high of the movie. Kudos to  @GeethaArts