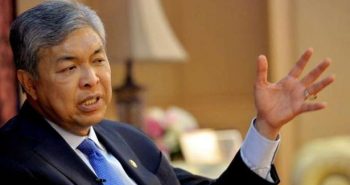 Interpol has issued a red notice, the closest to an international arrest warrant, for four North Koreans wanted in connection with the murder of Kim Jong Nam, Malaysia’s police chief said on Thursday.

The two women were charged with murder earlier this month, but police are looking for seven North Korean suspects in connection with the killing, including four who are believed to have made their way back to Pyongyang. Police requested Interpol’s help to apprehend the suspects last month.

“We have obtained a red notice for the four North Korean nationals who were at the airport on the day of the incident and who have since left… we are hoping to get them through Interpol,” police chief Khalid Abu Bakar told reporters.

An Interpol red notice is a request to find and provisionally arrest someone pending extradition. The murder has resulted in a diplomatic meltdown between two countries with once strong ties.

North Korea has questioned the Malaysian investigation into the murder and refused to acknowledge that the man murdered is Kim Jong Nam.

“The recent incident that occurred in Malaysia was clearly a political scheme by the U.S. and South Korea aimed at hurting the DPRK’s reputation and overthrowing the DPRK regime,” Pak said, using the North’s formal name, the Democratic People’s Republic of Korea.

“The only parties that will benefit from this incident are the enemy countries,” Pak told a hand-picked audience of reporters in a small, sparsely decorated room inside the embassy.

At the time of the killing, Kim was carrying a diplomatic passport bearing another name, but Malaysian authorities said on Wednesday Kim Jong Nam’s identity had been confirmed using DNA samples taken from one of his children.

Malaysia has also refused demands by the North Korean government for Kim Jong Nam’s body to be released, saying that the remains can only be handed over to the next-of-kin under local laws. No family member has come forward to claim the body.

State news agency Bernama, quoting Malaysian deputy police chief Noor Rashid Ibrahim, said on Thursday that the family had given consent for Malaysia to manage Kim Jong Nam’s remains. Noor Rashid did not say when or where the consent was given.

Kim Jong Nam had been living in the Chinese territory of Macau under Beijing’s protection after the family went into exile several years ago. He had been known to speak out publicly against his family’s dynastic control of North Korea.

A man claiming to be the son of Kim Jong Nam appeared in video footage last week, saying he was lying low with his mother and sister. An official at South Korea’s National Intelligence Service confirmed the man in the video was Kim Han Sol, the 21-year-old son of Kim Jong Nam.

Malaysia is one of the few countries outside China that has for decades maintained ties with North Korea. But as relations soured, Malaysia recalled its envoy from Pyongyang and expelled the North Korean ambassador.

Najib told reporters Malaysia will begin formal negotiations with North Korea “when the time is right”, clarifying previous reports saying that talks between the two countries had begun on Monday.