IPL 2017: Manoj Tiwary determined to do well in RPSG colours for his late father 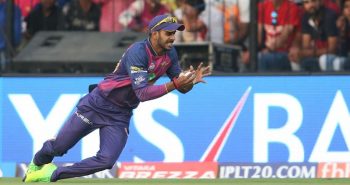 After Rishabh Pant, one more Indian cricketer, Manoj Tiwary, has lost his father (Shiv Shankar Tiwary) during the ongoing edition of the Indian Premier League.

“My father had a tongue and throat cancer and it was in its advanced stage,” the 32-year-old Manoj Tiwary said on Wednesday from Kolkata.

“I was busy preparing for the match against Delhi Daredevils when the sad news came in and I had to return home immediately.”

Tiwary, the Rising Pune Supergiant player, could not participate in the match which the Pune team lost by 97 runs against Delhi Daredevils.

“My father was admitted in the Howrah Hospital here (in Kolkata). But as he was not recovering well, was brought back home last week. The doctor Saurav Dutta is very good and tried his level best to cure him but destiny was not in my dad’s favour.”

“I was busy playing the matches, and therefore my family members didn’t want me to be distracted. However, I could perform the last rites,” he added.

“Our next match is against Gujarat Lions (in Rajkot) and hopefully I will play the match. Without doubts my best performance in the season would be dedicated to my late father,” Tiwary signed off.