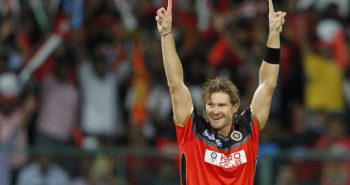 Former Australian all-rounder Shane Watson has been named as the interim captain of the Royal Challengers Bangalore (RCB) for this season of the Indian Premier League (IPL) in absence of Virat Kohli and AB de Villiers.

Last week when it was learnt that Kohli would be out of the tournament for a couple of weeks due to the shoulder injury he sustained during the third Test against Australia, RCB coach Daniel Vettori had said De Villiers would lead the side.

But, the South African star has too been ruled out of the opening game of the season on April 5 against defending champions Sunrisers Hyderabad at Uppal owing to his back problem.

He had missed playing the final of the Momentum Cup – South Africa’s premier one-day tournament – on Friday with a back injury, according to a tweet from Cricket South Africa (CSA).

“He still has some minor discomfort and we felt that couple of days off would be best before we have him back in action,” ESPNcricinfo quoted Vettori as saying. “We hope to see him on the field in good form by 8th April match against Delhi Daredevils.”

Meanwhile, in another blow to the franchise, young batsman Sarfaraz Khan has also an injury to his leg at practice on Monday and is likely to miss the entire league.

KL Rahul has been already ruled out of IPL 2017 due to shoulder injury which needed surgery.