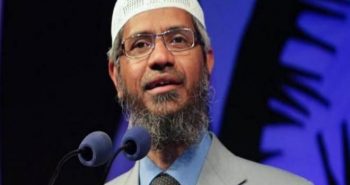 Controversial Islamic preacher Zakir Naik, whose NGO Islamic Research Foundation (IRF) was banned by the Narendra Modi -government for five years, has alleged that the ban was timed to the demonetisation announcement to divert media attention.

In an open letter, Naik alleges that Modi-government had decided to ban IRF even before investigators submitted the reports on IRF:

“No notice, summons, calls, no contact ever made with me to get my side of the story. I kept offering my help but it wasn’t taken.”

“Before investigations were done, even before reports submitted, the ban was already decided. IRF was to be banned. Whether it was owing to my religion or some other reason, does not matter.”

The National Investigation Agency on Wednesday asked banks to freeze accounts belonging to him and IRF which has been banned under the anti-terror law.

The BJP-led central government banned the IRF declaring it as a terrorist organisation under the Unlawful Activities Prevention Act (UAPA) for five years. He along with other unnamed office bearers of the foundation under section 153-A of IPC (promoting enmity between different groups on grounds of religion and doing acts prejudicial to maintenance of harmony),