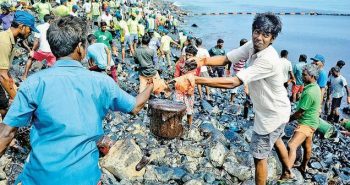 PETA an association calling themselves as they are for welfare of animals and creatures, many fishes and sea creatures were floating dead in the ennore sea due to the collision of two cargo ships and oil mixed accidentally in the sea. People’s question is these much fishes were dead now where is that welfare association(PETA) is it sleeping?, they started to tweet on the twitter.

To ban the Tamil’s culture jallikattu they know to spend in crores and get stay from jallikattu, but in this issue they not even taken a single step, and they haven’t tried to save the sea itself. But in that place those who helping the officers were students.

Our students not only protested for jallikattu they are also helping in this issue, and this is an evidence for that. The people who said bulls were torturing in jallikattu is missing now, PETA where are you?, these are some news from the twitter itself.