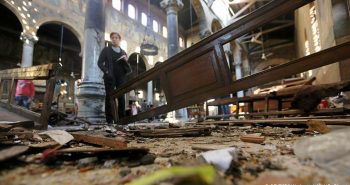 The Islamic State group claimed responsibility on Tuesday for a bomb attack on a Cairo church that killed 25 people  and wounded at least 45, the first claim for one of the worst attacks on the Coptic Christian community in recent memory.

“IS” identified the suicide bomber by the pseudonym Abu Abdallah al-Masri in a statement published Tuesday by its Amaq news.

The Islamist militant group described the perpetrator as “a martyrdom seeker of the Islamic State.”

“Every infidel and apostate in Egypt and everywhere should know that our war … continues,” the statement read.

The bombing took place at the church in Cairo adjacent to Saint Mark’s Cathedral, the seat of Coptic Pope Tawadros II.

Egypt’s government has reportedly released footage showing the suicide attack, including images of the alleged attacker.