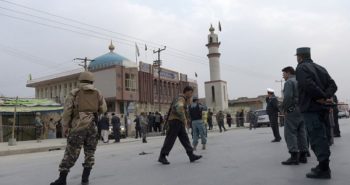 A suicide bomber struck a crowded gathering of Shiite Muslims in the Afghan capital on Monday, officials said, killing at least 30 people in the latest assault against religious minorities here to be claimed by militants loyal to the Islamic State.

The attacker was mingling with worshippers inside the Baqirul Olum mosque in the west of the city when he detonated the bomb, said senior police official Fridon Obaidi.

Islamic State claimed responsibility for the suicide attack. A statement in Arabic from Islamic State’s Amaq news agency said one of its fighters had targeted the mosque.
Bodies covered in blood could be seen on the ground among shattered glass.

Senior United Nations officials have condemned the attack at a mosque in Kabul. “The Secretary-General [Ban Ki-moon] condemns today’s attack in Kabul targeting civilians gathered for worship,” said his spokesman in a statement,

PM Narendra Modi in a series of tweets condemned the Kabul shrine attack where several Shi’ites were killed. In his tweet, he says, “We strongly condemn the heinous terrorist attack today on a Shia shrine in Kabul & condole loss of innocent lives. For regional peace and security, all sanctuaries, safe havens and support to such terrorists must end.”