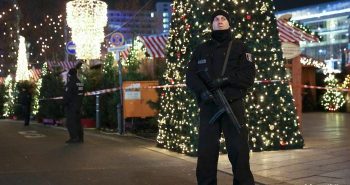 Twelve people are dead and 48 are injured  after a truck is driven at 40mph through crowds at theBerlin Christmas market at 7pm on Monday night.

The so-called “Islamic State” militant organization has claimed responsibility for the deadly attack at a Berlin Christmas market.

The so-called “Islamic State” (IS) on Tuesday said the driver of the truck that plowed into a Christmas market in Berlin on Monday evening was “targeting citizens of the Crusader coalition,” according to the group’s news agency Amaq.

There was no evidence to back the claim, nor was the perpetrator identified. Germany is part of a US-led coalition fighting IS in Iraq and Syria.

At least 50,000 ISIS fighters killed in Iraq, Syria in past two years: US official

Terror outfit ISIS is not a challenge: Rajnath Singh