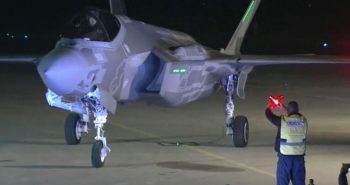 Israel was the first country to sign a foreign military sales agreement with the United States to procure the F-35. The country intends to use the new planes to replace its aging fleet of F-15s and F-16s.

The country received its first two F-35s on the same day the U.S.-based program was thrown into doubt when President –elect Donald Trump tweeted about that,“The F-35 program and cost is out of control,” Trump said on Twitter. “Billions of dollars can and will be saved on military (and other) purchases after January 20”.

The F-35 is the Pentagon’s most expensive weapons program, with an estimated cost of nearly $400 billion.

Once servicing and maintenance costs are factored in over the aircraft’s lifespan through 2070, overall programme costs are expected to soar to $1.5 trillion.

“It’s great value and I look forward to any questions that the president-elect may have,” he said.