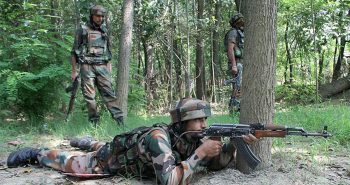 An Encounter between security forces and terrorists that continued on Saturday morning in Kulgam district of Jammu and Kashmir came to end after the terrorists fled the spot.

The encounter started on Friday night after the security forces were informed about the presence of militants in a village in south Kashmir’s Kulgam district.

According to the report, two terrorists are believed to be hiding around the vicinity, and one civilian is reported to be killed.

Meanwhile, the firing from both the ends has stopped in the region.

Currently, a high red alert has been announced across the state, including the Jammu-Srinagar national highway. Security level has also been stepped up in Katra town and the Vaishno Devi shrine.