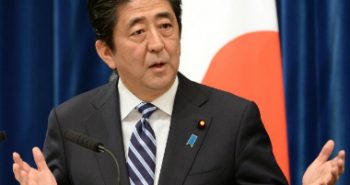 The cabinet of Prime Minister Shinzo Abe today approved Japan’s biggest annual defence budget in the face of North Korea’s nuclear and missile threats and a territorial row with China. Spending on fighter jets and submarines are partly behind the increase to 5.13 trillion yen (£35.2bn, $43.6bn).

A separate coastguard budget will also be raised sharply.

The Cabinet approved 5.13 trillion yen ($43.6 billion) in defence spending for the fiscal year starting in April, up 1.4 per cent from the initial budget for the current fiscal year, as tensions with China simmer over disputed islands in the East China Sea.

Rising tension with China over disputed islands in the East China Sea has led to Japan’s coastguard budget being raised to 210bn yen ($1.8bn) next year – up from 187.7bn yen.