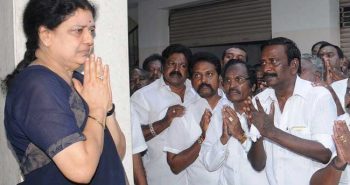 Tamil Nadu Revenue Minister, R B Udhayakumar handed over the resolution titled “Thai Thanta Varam,” (Sasikala is a boon granted by Amma) to Ms Natarajan, urging her to take the responsibilities of both the party and the government.

“Besides guarding the AIADMK, Chinnamma (as Sasikala is referred to by party workers) should fight the RK Nagar bypoll (now vacant due to the death of Jayalalithaa) and assume responsibility as Chief Minister, and lead the Amma’s government,” Udhayakumar told reporters.

According to Times of India, Udhayakumar quotes as saying, however, stresses that the resolution is not a move against O Panneerselvam. “OPS is trustworthy and has proven himself during the two times he was interim CM. But both the party and the government should be headed by the same person. Sasikalaa is capable of doing that. She has the affection of the people”.