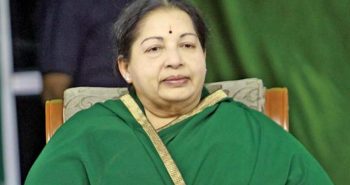 Tamil Nadu Chief Minister J Jayalalithaawas in a critical condition after suffering a cardiac arrest and is being treated by a team of specialists at Apollo Hospitals where she has been admitted since late September.

Hundreds of party supporters were seen around the Apollo Hospitals as violence broke out when they tried to picket police barricades.

Doctors were closely monitoring the condition of Jayalalithaa and trying their “very best”, the hospital said early today, hours after she suffered the cardiac arrest.

“We are in constant touch with Apollo and Tamil Nadu Government. They had requested a team of doctors from AIIMS. We have sent a team of specialists from AIIMS Dr Khilani, Dr Trikha, Dr Narang and Dr Talwar. We hope that doctors from AIIMS and Apollo will be able to help in her recovery. We pray to God that she regains her health,” Nadda said.

On Sunday night the hospital said, in a statement: “The Hon’ble Chief Minister of Tamil Nadu who is undergoing treatment at Apollo Hospitals, Greams Road, Chennai, suffered a cardiac arrest this evening. She is being treated and monitored by a team of experts including cardiologists, pulmonologist and the critical care specialists.”

It later said in a tweet that she “is on extracorporeal membrane heart assist device and is being treated by a team of expert doctors and critical care specialists”.

“Dr Richard Beale from London has also been consulted and he has concurred with the line of treatment by our cardiologists & pulmonologists,” it said in another tweet.

In an another tweet, the hospital said: “The Hon’ble CM is the beloved leader of the masses. Please join us in praying for her speedy recovery. #GodblessAmma #Jayalalithaa.”

Corona virus is not turned as community transmission in India