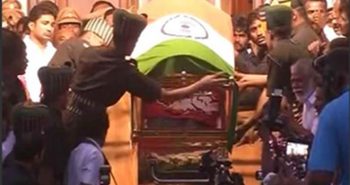 Ms Jayalalithaa’s body was first taken to her Poes Garden residence from Apollo Hospital, and from there was moved to Chennai’s Rajaji Hall, draped in the national flag, where people will pay their last respects.

The Hall was thronged with AIADMK workers and supporters yearning for a last glimpse of their beloved leader.

Newly sworn-in CM O Panneerselvam was also present at the Hall, along with some other leaders.

Her funeral will take place this evening.