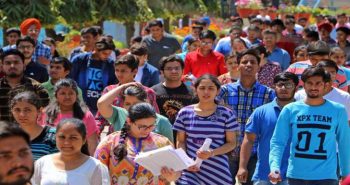 The cut off for the Joint Entrance Examination (JEE) 2017 is expected to be around 105 this year, according to experts. The exam which was held on April 2, 2017 was considered to be of moderate difficulty, despite the tricky mathematics portion.

“The physics and chemistry sections of the JEE mains were comparatively more simple than those of the previous years,” says Venkat Ramana, JEE exam head of TIME Hyderabad. He adds that this is among one of the factors that may result in a slightly higher cut-off as compared to the last year.

The Aakash Institute also predicted the cut off to be 100 or higher (up to 105) this year. Experts comment that the increase in the number of candidates for the examination will also contribute to a higher cut-off. There are about 20,000 more candidates this year as compared to the 2016 JEE mains exam.
“The higher cut-off would balance out the number of candidates who manage to clear it. The cut off for the reserved categories will be more or less similar to last year,” says Ramana.

The answer key for the JEE Main 2017 answer keys will be displayed from April 18-22. Over 10 lakh candidates appeared for the offline paper this year.