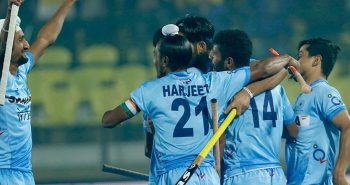 India advanced to the semifinal of Junior Men’s Hockey World Cup 2016, notching up a thrilling 2-1 win against Spain, at the Major Dhyan Chand Stadium in Lucknow on Thursday.  Meanwhile, the juniors set up a semifinal clash against Australia in Lucknow on Friday.

Spain took the lead in the 22nd minute as Marc Serrahima struck from the a penalty corner.

Trailing 0-1 at the half-way mark, India did well to score two goals in the second half .

Simranjeet pounced on the rebound to level the scoring for India in the 57th minute.

After that Harmanpreet Singh’s clinical finish of a penalty corner in the 66th minute gave India the lead after intense hockey in the two halves.