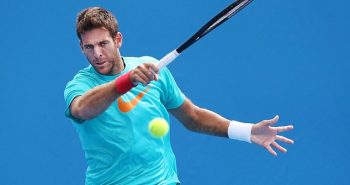 ‘What I need is to have someone get me physically fit enough to last the whole year,’ he said.

‘There’s a fortnight to the Australia Open and I’m unlikely to make that objective.

‘We’re looking at what the priority is. If tennis waited for me for two years, Australia can wait for me for one more.’

“If I’m being smart, I know that I have 15 days of practice left for Australia and for my first tournament (Auckland), and that’s a goal I’m not going to make,” del Potro said.

Del Potro said in addition to taking a pass on the Australian Open, which starts on 16 January, he may also have to miss the ATP event in Delray Beach, Florida, in late February.

The 28-year-old won the silver medal at the Rio Olympics in August.

A  former world No. 4, del Potro’s ranking stands at No. 38 due to his many wrist injuries and operations.