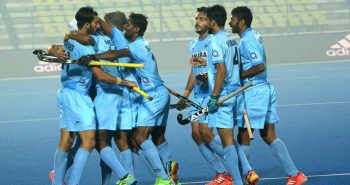 India defeated England by an overwhelming 5-3 in a Pool D encounter to virtually secure a place in the quarterfinals, in Lucknow on Saturday.

India, who had earlier spanked Canada 4-0 in their tournament-opener, scored two goals in the first half through Parvinder Singh (24th minute) and Armaan Qureshi (35th) before finding the net thrice in the second half, courtesy Harmanpreet Singh (37th), Simranjeet Singh (45th) and Varun Kumar (59th).

On the other hand, it was England who drew the first blood through Jack Clee (10th) before pumping in two late goals from Will Calnan (63rd) and Edward Horler(67th).

India are now leading Pool D with six points from two wins and next play South Africa on 12 December. England are placed second with three points from two games and will finish off the pool engagements against lowly Canada on 13 December.