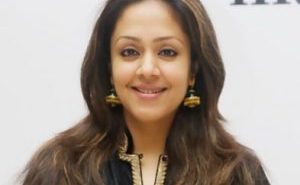 Vijay and Atlee are going to join their hands once again after the success of “Theri” and its hasn’t named yet, just for now its titled as Vijay 61. Vijay is going to act and share the scree with two leading actress kajal Agarwal and Samantha.

There were many talks going on that “Jyothika” will act in a role in Vijay 61, still its not yet officially confirmed by the actress herself. Also the movie crew hasn’t gave any official news on this, the actress have to sign the document for that to accept and act in that Vijay 61.

It seems to be jyothika hasn’t signed the document or is there a possible way of signing in that and in this movie there is another big person the writer for Baahubali has joined in Vijay 61.

Kaatrin Mozhi Trailer is out!