‘Kamal does not have money’: Rajini at Chandrahasan memorial meet 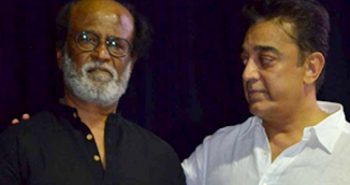 At the meet, an emotional Rajini revealed, “Financially, Kamal does not have properties of his own when compared to the actors of this generation. Kamal considers K Balachander, Ananthu, Charuhasan and Chandrahasan as his lifelines. Now, three of them have left him. While I have worked with Charu anna in many films, I’ve met Chandrahasan twice. But we’re there for Kamal.”

Kamal and Rajini have been the ruling duality of Tamil cinema for nearly four decades now. However, their friendship and personal equation never took a beating.

Kamal himself was quite emotional, remembering his brother.

“I’ve many brothers like Rajinikanth, can learn the art of money making and filmmaking from them. I can’t stop talking about my brother Chandra, he considered me as his own son. Talking about his noble qualities can’t be restricted to this memorial meet, would remember him forever. They way he handled people with great respect is incredible, he never appointed a maid to wash his clothes, he is a great cook,” he said.