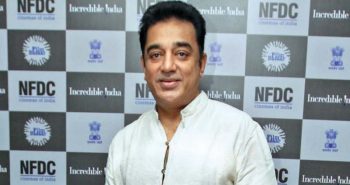 If sources are to be believed, this is the biggest buzz that’s doing rounds in tinsel town — that Ulaganayagan Kamal Haasan will be making his foray into the small screen, hosting the Tamil version of top-rated Hindi reality show Bigg Boss.

It’s not new for the Nayagan star to spring a surprise given an opportunity, as one may recall the decision of the actor jumping into branding products. A few years ago, Kamal, who was never associated with any brands in his long career, made heads turn by endorsing a textile showroom brand. Though sources close to the actor are not aware of any such development, reports from the telly scene suggest that talks are on with the prolific actor. Sources say that a huge sum has been offered to Kamal to host this reality show. On the work front, the shooting of the actor’s comedy caper Sabaash Naidu, a trilingual is progressing and Vishwaroopam 2 is also in the pipeline.

TV actress Shweta Tiwari gets greeted by an enthusiastic dog at airport; but fans seem concerned