Kansas shooting: Srinivas and his wife were compared to ‘Amitabh and Jaya’ 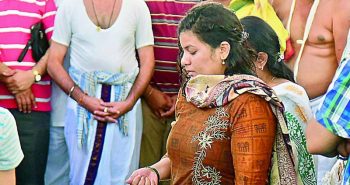 In a Facebook message posted after her husband’s funeral on Tuesday, Sunayana Dumala, wife of Srinivas Kuchibhotla – the Indian techie who was shot dead in a racially-motivated crime in Kansas, United States – revealed how the couple met on Orkut in 2006 and how, Kansas was “an instant choice” to settle down after marriage.

“I lost my husband, a soulmate, a friend and my confidante. He was a source of inspiration, a support system not just for me but to any and all he got to know,” Ms Sunayana wrote.

The post details the couple’s life from 2006 to 2017 and goes on to reveal that Srinivas convinced both families to allow the wedding and encouraged his wife to pursue higher studies in the United States.

“We decided to move from Cedar Rapids, Iowa, to a bigger city so that I could get a job and be able to pursue my dreams. Kansas was our instant choice. We built our dream home, which he painted, and installed the garage door. It’s so unfortunate that this dream of ours is now shattered. We were planning to expand our family and had a doctor’s appointment just a few weeks ago. I really wish we had a child of our own in whom I could at least see Srinivas and make him like Srinu,” read the post.

Sunayana also wrote about Srinivas’ confidence in Prime Minister Narendra Modi and how much he admired external affairs minister Sushma Swaraj for her “courage”.

She also had questions for the government of the United States. “DO WE BELONG HERE? Is this the same country we dreamed of and is it still secure to raise our families and children here?”

As of late Wednesday, the post has been shared over 6,000 times on the social network. Sunayana goes on to thank her friends, the press, Microsoft boss Satya Nadella, the CEO of Garmin (the company Srinivas worked for) and her own firm.