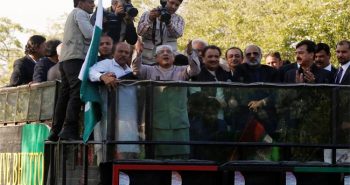 Former Pakistani President  and chairman of Pakistan Peoples Party (PPP), Asif Ali Zardari ended his 18-month self-imposed exile and returned to his country from Dubai in a private jet on Friday, ahead of the death anniversary of his wife and former Prime Minister Benazir Bhutto.

Addressing his supporters outside Karachi airport shortly after his arrival, Zardari said that he will continue his fight to make ‘Kashmir a part of Pakistan’.

The former president said that Pakistani flag has become the ‘symbol of freedom for Kashmiris’.

“Kashmir will become part of Pakistan,” he said, adding that ‘Pakistan is a nation that has overcome all challenges and that it is not a country of terrorists’.

Addressing his supporters outside Karachi airport shortly after his arrival, Zardari said, “The day will come when we will again form the government through the power of masses. We will again sit in the (elected) houses and God willing will change the destiny of the people of Pakistan”.