Kashmiris threatened in some states, ensure their safety: Rajnath to CMs 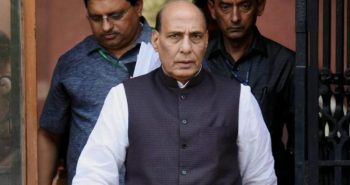 Home Minister Rajnath Singh on Friday asked all states to ensure safety of Kashmiris living in different parts of the country.

Condemning the alleged incidents of harassment of Kashmiris, the Home Minister said they are like any other Indian and an advisory is being sent by the Home Ministry to all states to ensure the safety and security of people from the Valley.

“I have come to know that there were a few incidents of misbehaviour towards Kashmiris in some places. I appeal to all Chief Ministers to ensure security of Kashmiris,” he told reporters in New Delhi.

Singh’s statement came in the wake of reports alleging that Kashmiri students in Rajasthan and Uttar Pradesh were being threatened after the latest incidents of stone pelting and assault on security personnel by Kashmiri youths in the Valley.

Hoardings calling for Kashmiris to leave Uttar Pradesh have turned up in Meerut. They have been installed by an outfit called UP Navnirman Sena, whose chief Amit Jani said they had put up the banners outside institutions where Kashmiri students study.