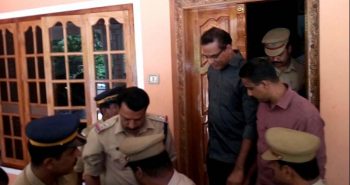 Fr Robin Vadakkumchery, former vicar of St Sebastian’s church, Neendunokki, near Kottiyoor, who was under custody over raping a minor girl, was arrested by police on Tuesday. He was already nabbed by a team led by Peravoor CI N Sunilkumar on Monday night, while he was trying to escape to Canada. The girl had given birth in the second week of this month and the hospital authorities also tried to hush up the matter. The accused admitted his crime during interrogation.

The newborn was shifted to a Christian orphanage in Vythiri, Wayanad, just a day after the delivery, said the CI, who is the investigating officer. The police shifted the newborn to a government home in Pattuvam on Monday. Fr Vadakkumchery was taken to the Parish house for collecting evidence, before taking him to Kuthuparamba judicial first class magistrate court. Since he is charged under POCSO Act, he will not receive bail until the trial is over.

The 16-year-old victim was a student of IJM Higher Secondary School, Kottiyoor, where Fr Vadakkumchery was the manager. She was raped at the Parish house, said the police. The school authorities as well the parents were not aware of the pregnancy, until the delivery, they said. “The girl attended classes until February 6, and the she gave birth on February 8, if the statements are true. The parents took her to hospital in order to treat ‘an infected appendix’. It was only on Sunday, an anonymous call, from inside the school informed the Childline about the involvement of the priest in the ‘pregnancy’. The girl’s statement was taken first by women cops, to whom she said her father was responsible. The father also admitted to raping his own daughter,” the CI said.

However, the police could identify the conflict between the statements of the father and the daughter and in a detailed questioning, the girl herself admitted that she was abused by Fr Vadakkumchery. Iritty DySP Prajeesh Thottathil said that the police were misled in the beginning, but the detailed questioning helped them to track the accused and trace him immediately. The police said that Christuraja hospital, Kuthuparamba, was also part of the crime, though the authorities insist that they were informed that the girl had crossed 18. The orphanage also played foul by concealing the information even from the police and Childline authorities.