Kerala School of Medical Education : X-student sets fire on him and the girl he loved:- 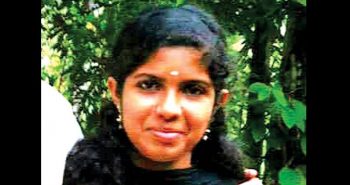 Aadarsh suneethan who was 26 years old had studied in School of medical Education in keral, loved a junior girl who currently studied final year there named Lakshmi who’s 20 years old. They loved each other but after few months the girl stopped with that boy.

Aadarsh, who completed the BPT course in 2013, had not passed the examinations. He came to the campus on Tuesday morning to write the supplementary examinations. On Wednesday around 10 am, Aadarsh reached the classroom of Lakshmi and wanted to speak to her. However, the girl who was with her classmates, refused to talk to him. Aadarsh went back and returned  with a bag on his shoulders by 1 pm.

According to the police, Aadarsh took out a can of petrol from his bag and poured it over the girl and himself. Lakshmi and the scared girl students in the class rushed out, but he pursued her and caught hold of her in the library room, hardly 20 metres from the classroom. He lighted the cigarette lamp over the girl and embraced her before other students could intervene.