‘Kohni maar’: Akshay and Taapsee teach women how to ‘act’ in self-defence! 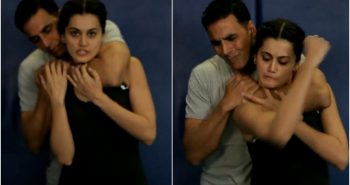 Akshay Kumar and Taapsee Pannu have perfect gift for the women out there, ahead of ‘Naam Shabana’ release.

The two took to social media to demonstrate ‘kohni maar’ for the ladies, where they can use their elbows in self-defense.

The video also sees the ‘PINK’ actress talking about how, instead of reacting, women freeze out when touched inappropriately. She even asks everyone to use their own body parts to protect themselves and finally demonstrates the stunt with the ‘Khiladi’ actor.

She says in the video, “I fail to understand how weak are we that we can’t protect ourselves. When someone touches us, our mind doesn’t work. When a man comes and touches our breast or back, we freeze, and they take advantage of that moment and do whatever they want.” Adding, “To answer this, we should know what to do. Throw a stone and run, kick, use your hands… Your body parts are your weapons. Use your ‘kohni’ (elbow), trust me it hurts a lot.”

Akshay tweeted the video and wrote alongside, “Don’t just freeze…ACT & REACT coz ur biggest weapon is with YOU! Watch, learn & show your move with #KohniMaar! Kya pata kab kaam aa jaye.”

‘Naam Shabana’, with the 29-year-old actress in the lead, is a spin-off, based on her character in the film ‘Baby’.

She essays the role of an undercover agent. The Shivam Nair-directed film, which also features Akshay in a special role, will release on March 31.