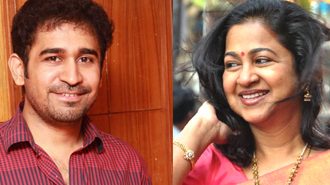 In this year, Vijay Antony launched the movies of Bichagadu and Bethaludu which were gone through the success rate and it is a block buster hit. The actor has been roped for the upcoming untitled movie, which will be produced by  Radan Media Networks of yesteryear actress Radhika Sarathkumar.

The latest update about the project is that the shoot will commence from February 2017 and the title has been retained as a suspense factor. The director and other cast and crew members of the project are expected to be announced in due course.

It is a bilingual movie, which will be made in Tamil and Telugu simultaneously. Earlier Vijay has worked as music director with this banner for a serial.