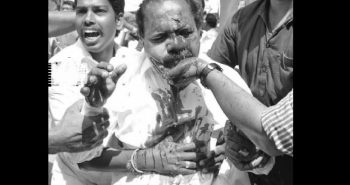 The clashes outside the Kerala Law Academy broke out around 11.30 am on Wednesday. The BJP had called for a hartal in Thiruvananthapuram seeking resignation of Lekshmi Nair, the principal of Kerala Law Academy. Earlier, the Law Academy had agreed to remove Lekshmi Nair from the post and not allow her to become a faculty at the college for five years.

The BJP, Congress and its student organizations were however demanding her resignation and did not want any period time given to facilitate her return. Around 300 BJP workers marched to the Law Academy on Wednesday morning. As police stopped them from entering the premises, few protesters started pelting stones.

The police then lathi charged, leading to an escalation in the violence. Water cannons and tear gas shells were used to disperse the angry crowds. The shrapnel from a tear gas shell hit Vava’s face, injuring his left eye. Bleeding profusely from his face, he was rushed to the Thiruvananthapuram Medical College.  BJP leaders say he has lost vision in his left eye.