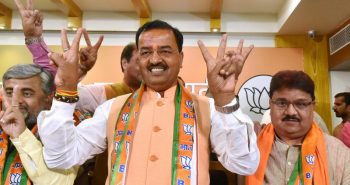 “Legislature party will decide who will be the chief minister. The oath taking ceremony will be on March 19 and all national leaders of the party will attend the ceremony,” he told reporters outside Parliament.

Maurya, who was admitted to hospital yesterday after he complained of uneasiness, said he was “fully well” now.

Repeatedly asked about the possible candidates for the chief minister’s post, he said, “There will be a legislature party meeting tomorrow at 4 PM. You will get to know tomorrow as to who will head the government.”

Maurya was also asked about BJP president Amit Shah’s remark yesterday that he had given Maurya the responsibility to select the CM. “It was said in a lighter vein. Whatever is my responsibility as party’s state president I will fulfil that,” he said.

Though the BJP has formed governments in Manipur and Goa, it is yet to declare its chief minister in UP where it has got two-third majority.

The selection of Chief Minister in UP is crucial for BJP as the person would be expected to steer the party in the 2019 Lok Sabha elections in the crucial state.

There were conjectures within the party after Shah’s remark as to whether Maurya, who is BJP’s OBC face in UP, is out of the reckoning.