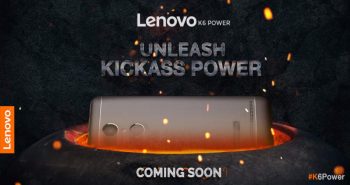 The Chinese tech giant, Lenovo is all set to launch its K6 Power smartphone in India on November 29. The company has already sent out media invites for the launch event which is scheduled to be held on Tuesday (Nov 29) in New Delhi, at 2:30 pm.

Lenovo Vibe K6 Power is equipped with a 4000mAh battery along with a 13MP camera module with an LED flash on the back and an 8MP camera module on the front. Regarding connectivity options, you get Wi-Fi 802.11 b/g/n, Bluetooth v4.1, GPS and 4G LTE radios.