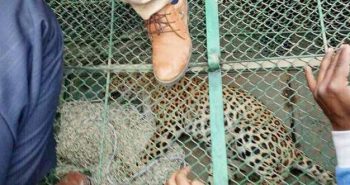 In North India ,Palwal district a male leapord strayed into the densely  populated Krishna Colony.  It was rescued after a 5 hour operation.  A forest Officer was injured by the leapord during the rescue operation.  The leapord belonged to Shivalik hills ,the officials said after seeing the skin pigments.  In Krishna colony around 7 a.m. the leapord aged around 4 years was first spotted inside an abandoned building.  Soon, a team of over 10 forest officers led by two Divisional Forest Officials reached the spot.  The police were called in for crowd management.  After sometime they cornered  the leapord.  For the past few months leapord  has strayed into a residential area in Gurugram.  This is the third of such straying.