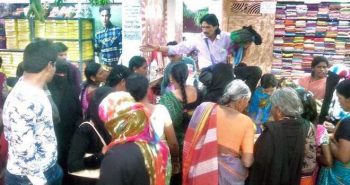 In Karnataka the owner of a saree centre Mr.Chandrashekar Pasarge  gave away sarees just for  a rupee each.  It was for a surprise as other fellow vendors felt he would go bankrupt.  But he developed his business.  He brought a second shop doubling the number of workers.  His second shop is bigger than the first one.  He has also offered many discounts.  To help the poor women who were affected by demonetisation Mr.Pasarge’s children suggested to sell sarees for a rupee each.  What can I say? The one rupee sari scheme has brought me luck, I think,” he manages to say, with a broad grin, amid dealing with the countless customers that flood his shop.   “I will not close shop, I will keep growing,” he said.  It is roaring business for him.  Several schemes have been introduced replacing a saree a rupee.  It is between Rs.20-Rs.265.Silk Sarees worth Rs.2000  are being sold at Rs.450.  The surprise package is the wedding offer when the purchase crosses a certain limit ,a steel cupboard,refrigerator,bed or other household material will be given.  The offers are available throughout the day but need to wait two hours for a twenty rupees saree.  “We had 12 workers. Now we have 26,” says Pushpak Kumar, store manager.  “Our workers are like honeybees.   They work without rest or break for over 12 hours a day. They go home at 11 p.m., but are back by 10 a.m. the next day,’’ Mr. Kumar says.  As per the shopkeeper  a  sari a rupee scheme brought wide publicity.  Newspapers and TV channels covered it.It helped them to gain name.  They have customers now from borders in Telengana and Maharashtra.  They feel Prime Minister Narendra Modi has given them this opportunity.