Manohar Parrikar to be back as Goa CM, likely to take oath tomorrow 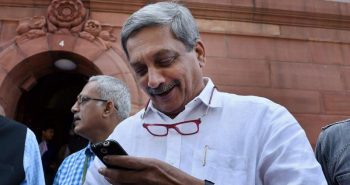 Despite coming second in Goa Assembly elections, the BJP has staked claim to form government under the leadership of Manohar Parrikar.

According to reports, Parrikar, who is currently the Defence Minister, is likely to take oath as the Goa chief minister tomorrow at 5 pm.

On Sunday, Goa Governor Mridula Sinha had appointed BJP legislature party leader Manohar Parrikar as the chief minister and asked him to prove majority on floor of the House within 15 days of taking oath, after he staked the claim to form government.

“Governor Mridula Sinha has appointed Manohar Parrikar, the Leader of the Goa BJP legislature party, as the chief minister of Goa,” Rupesh Kumar Thakur, Secretary to Governor has stated in the press note issued on Sunday night.

“Parrikar has submitted evidence before Governor, the support of 13 MLAs of BJP, 3 MLAs of MGP, 3 of Goa Forward party and two independent MLAs thus having a total strength of 21 MLAs in the 40-member assembly,” it added. The Governor has asked Parrikar to prove majority in the Legislative Assembly session within 15 days after administration of oath of office, the note said.

Earlier, enlisting the support of two Independents, three members each of the Goa Forward Party (GFP) and the Maharashtrawadi Gomantak Party (MGP), and a lone NCP member to cobble up the rainbow coalition, the BJP members led by Defence Minister Parrikar called on the Governor to formally stake the claim, a day after the fractured verdict in state elections.

Though the BJP has claimed the support of the NCP MLA Churchill Alemao, he is yet to provide the letter of support.

The strength of the coalition stands exactly at 21, the magic figure. Earlier, despite emerging as the second largest party behind Congress, the BJP pulled off a coup and staked claim to form the next government under the leadership of former chief minister Parrikar.

Parrikar had said, “though the BJP fell short of the numbers required to form government, with the help of alliance partners, the magical figure of 21 seats is achieved. I promise that we will give stable government which will work towards the development of the state.” “I have already staked the claim to form government and I am expecting invitation from the Governor any time,” he said.

In the 40-member House, the Congress has 17 MLAs, followed by the BJP (13), MGP (3), GFP (3), NCP (1) and Independents (3). Earlier today, the newly-elected BJP MLAs passed a resolution urging party chief Amit Shah to nominate Parrikar as the leader of the legislature party.

Addressing reporters tonight, Union minister and BJP’s Goa election in-charge Nitin Gadkari said, “I explained to Prime Minister Narendra Modi and party chief Amit Shah that deputing Parrikar back to Goa is in the interest of welfare of the state and stability of government that would be formed.”