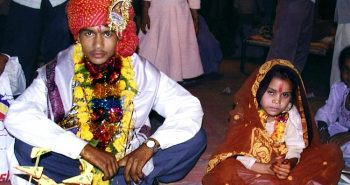 In Andhra Pradesh child marriages are still prevalent.  Though its banned 1,71,083 girls and 1,72,934  boys were married off in the last five years in Andhra Pradesh  before they reached the marriageable age.  Around 20,584 girls (3.3% of the girls) and 19,557 boys (2.4% of boys ) got married before they attained 18 years and 21 years of age.  Krishna district tops the Statewide list of child marriages.  National Commission  for protection  of Child Rights (NCPCR) in collaboration with Young Lives India has made analysis on the incidence and intensity of child marriages.  On Thursday at a State –level  consultation on child marriages ,data was presented.  In the worldwide rank of countries with high incidence of child marriages,India stands 11th in the worldwide.  It accounts for a high 47% of all children.Nigeria is in the first place with 68%.Almost 39,000 minor girls are being married everyday.  To prevent child marriages the Andhra Pradesh Women and child Welfare ,Police and revenue departments have been taking many steps.  In all, 2,322 child marriages were foiled in the last three years by these departments and about 25 cases booked under the Prohibition of Child Marriages Act, 2006.