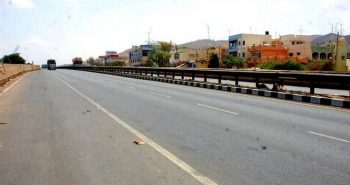 For the purpose of easier travel the four lane national highways were planned across the country  but unscientific  implementation  of the project has caused  severe problems  to people especially those residing on either side of the highways.  In the National  Highway 4 stretch from  Hiriyur taluk in Chitradurga to Harihar in Davangere district there has been 1,630 accidents in the past three years.   Chitradurga district limits has witnessed 897 deaths  and Davangere  limits had 733 deaths.In Chitradurga  during this  period 132 people were killed.  501 and 778 people picked up severe and minor injuries.  There were around 111 deaths  and 358 and 517 major and minor injuries in Davangere district.   According to official sources, in 2014, the NH-4 stretches in Chitradurga district recorded 298 accidents, in which 55 people died and 168 people were severely injured.   In 2015, there were 374 accidents, with 34 people being killed and 182 severely injured.  In 2016, there were 198 accidents, which resulted in 43 deaths and severe injuries for 158 persons.  In Davangere, there were 197 accidents in 2014 with 26 deaths, 235 severe injuries and 95 minor ones.  The following year, there were 275 accidents, in which 36 persons died.  In 2016, there were 261 accidents, with 49 deaths, 32 severe injuries and 266 minor ones, sources said.  To avoid such accidents residents of villages on both sides of  NH4 have been demanding underpasses and overbridges.  Underpasses and overbridges will be constructed  wherever necessary said National Highways authority of India(NHAI)  project director Somshekhar.  By the end of March tenders will be finalised.   For this purpose tenders have already been invited.By September plans will be carried out.