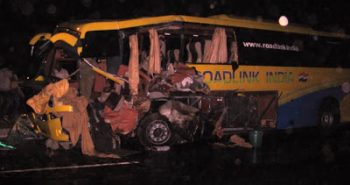 In  Vijayawada district on tuesday seven passengers died and 25 people suffered injuries during wee hours when a private travel bus fell in a canal in National Highway village of Krishna district.  The Diwakar travels was on the way to Hyderabad from Vishakapatnam and it met with an accident when the driver lost control of the vehicle.  To many private hospitals and Government General hospitals the injured were rushed and the deceased are yet to be identified.  To take the injured to the hospitals it took about two hours as for the bodies to be retrieved.  The injured are in a critical condition.  The mishap occurred due to rash driving said the injured.   Home Minister Nimmakayala Chinarajappa and Health Minister Kamineni Srinivas enquired about the mishap and directed the officials to extend medical aid to the victims.